skip to main | skip to sidebar

Freedom on the Street 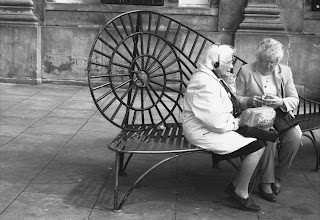 I have been following with interest, and a fair amount of alarm, the case of Greek photographer Periklis Antoniou, who was arrested after taking a photo on the London Tube. The photograph, albeit of the inside of the carriage with a wide lens, included a 17 year old girl whose father complained about the photograph to the police, despite Antoniou deleting the photographs when confronted by the girl's mother. The photographer was charged with breaching Section 5 of the Public Order Act 1986, for causing 'public harassment, alarm or distress' to the father arising out of the picture taking. On Monday he was cleared in a hearing at Westminster Magistrates' Court, following due to lack of evidence that the photographer had breached the Act.

Further details can be found on the Amateur Photographer site here.
Posted by Jo Belfield at 09:38

Jo Belfield
Bollington, Cheshire, United Kingdom
I am a female photographer and mum to two boys. I specialise mainly in fashion and contemporary portraiture. I have a large studio in Macclesfield, big enough to undertake most commercial projects and create some fantastic images!